I get a lot of questions about how to start and scale growth teams. Growth teams need to spend as much time thinking about how to scale themselves as they do on scaling the product. In this post, I’ll outline how I’ve seen growth teams start and evolve, define the ideal end state, and describe some of what you work on at each stage along the way.

The first question to ask is why you need to start a growth team. Why not just have traditional product and marketing teams? It’s a good question, and not well understood. Traditionally, product teams make the product, and marketing is in charge of getting people to try and continue using the product. Marketing can include traditional efforts like events, advertising, and PR, and perhaps some branding efforts and some online marketing. Of note, online marketers and traditional marketers have historically been very different, so depending on the manager, all of the budget and team allocation typically went to either online or traditional — not evenly split.

However, the best startups grow super fast not because of traditional marketing or online marketing, but because they tune the product to drive growth. This is why growth teams matter. Marketing teams typically don’t have access to the product roadmap to make changes to things that will impact SEO, conversion, optimization, or virality, nor the expertise to work with engineers and designers on making these changes. And product managers often prioritize new product features over engineering that will drive more people to the existing value. Growth teams are the connective tissue between product, marketing and engineering.

Starting a Growth Team: Focus On One (Easier) Problem
Goal: Improve one area important to the growth of the business
Team: PM, Designer, Engineer(s), Analyst/Data Scientist (sometime PM or engineer assumes this role as well early on)

It can be overwhelming to consider all the problems you need to solve. When you start a growth team, do not to try to solve all those problems at once. A growth team should start by going deep on one carefully chosen problem:

Since growth teams are typically treated with a healthy dose of skepticism by other teams when they start, carefully choosing your first area of focus will help maximize the growth team’s chances for success. Let’s say a growth team starts with a hard problem: Trying to increase activation of new users. It takes a month to measure increases in activation rates, and it has one of the smaller sample sizes in the traditional growth area. You run an experiment. It doesn’t work. You run a second, and another month goes by, and it still may or may not work. Now two months have gone by without a growth team win. People on the growth team are questioning if this is the right team to be on, and other teams in the company begin to question your purpose. (Hat tip to Andy Johns from whom I am blatantly stealing this example).

There are common growth problems where you can likely show quick progress. One is conversion optimization. Another is returning users via email and notifications. Still another is improving referrals or virality. These areas allow you to run multiple experiments quickly because the metrics will move immediately (they don’t take time to measure like activation), and because they have high sample sizes (all new users or all existing users opted in to communication).

Last note: When starting a growth team, it’s important that they sit together and not with their functional team members. The collaboration between the different skill sets and short feedback loops is how the magic happens.

As a growth team grows, the team can start looking at multiple problems. These problems are typically across the AARRR framework by Dave McClure, (however revenue is frequently a separate team in an ad supported business.) The growth team separates into sub-teams who have their own meetings, and entire growth team meetings become less frequent. PMs, designers, and analysts may work on multiple teams. At this point, the growth team assumes ownership of certain areas of the product, including (but not limited to):

Owning these areas creates easy swim lanes between teams and prevents turf wars with the core product team. Growth leaders have to determine how to allocate people to work on the most impactful problems across the growth stack, and if a sub-team does not have enough support to make an impact, the growth leader should consider whether to support that problem at all. Growth teams also have to own goal setting, which means understanding historical performance and setting absolute goals.

At this point, teams start to work on both improvements in infrastructure and experiments. For example, at Pinterest, I was managing both the acquisition and retention teams. The retention team was struggling to grow because of an unwieldy email infrastructure. The infrastructure was built to support triggered, social notifications, but our strategy had evolved to more personalized, content-based recommendations. These jobs were taking days to run and would send automatically when complete, even though someone might have received a social notification five minutes before. So we spent nine months rebuilding it to allow us to scale more effectively. The retention team saw a step change in its performance and actually hit its Q1 goal in the middle of January after it was complete. 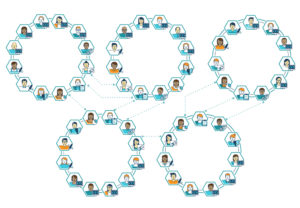 As the growth team continues to grow, it involves more stakeholders and expands its scope. Instead of having clear areas of focus separate from the core product, the team shifts to analyzing the entire product and trying to figure out the biggest obstacles that are preventing the company from growing faster. At this point, the growth team has built up enough credibility that it doesn’t fight turf wars — it is laser focused on finding and solving the biggest problems that prevent people from connecting to the current value of the product.

Usually, the problems at this stage are deep inside product features and go beyond improving SEO, signup, viral and on-boarding flows, and sending the right emails and notifications (though growth teams still work on those too). The growth team is now identifying the friction that prevents people connecting to the core value elsewhere in the product. A lot of this work is simplifying product flows or building country-specific optimizations for slower growth countries. Growth teams can also become service organizations to marketing initiatives around this time, and I’ll talk about that in another post.

At Pinterest, we migrated to this phase rather recently. As we started to look at friction in the entire product, we saw in qualitative research that new users were getting bombarded with so many concepts it confused them: what a Pin is, where they come from, how to add your own Pins, what a board is, group boards, profiles, etc. The growth team made a list of the core things new people needed to know to get excited and start to build an understanding of the service. Then, we started experiments to remove everything else from the new user experience and only introduce it back once the core concepts were clearly learned. This helped improve activation rates.

What I described above is an amalgam of what I’ve seen in the market that works best. Of course, you should always tweak your approach based on the talent of your team and your company’s culture. I would love to hear what you think of this approach, and any additional insights you think would be useful to share with other growth leaders.

This posted originally appeared on the Greylock blog.

5 thoughts on “Starting and Scaling a Growth Team”