Entrepreneurs ask me about how to grow all the time. They ask about SEO, about virality, and about increasing conversion, about onboarding. They ask about hiring local teams, building up new functions, and hiring executives. What almost all of them miss is that all of this is context specific on what stage of company they are in. There are two types of growth strategies: non-scalable strategies to get to scale and scalable strategies. I have come to call these kindle strategies and fire strategies. I’ll explain a little bit more about that, and how to think about them.

Kindle strategies can be very unsustainable. Their only goal is to get the company to a place where more sustainable strategies are available. The classic example is in marketplaces. Marketplaces only work when their cross side network effects kick in. Those network effects can only kick in once you get to liquidity. Once network effects do kick in, they can generally be optimized for very sustainable growth. When I left Grubhub, my former co-workers started complaining to me about how much Doordash, Uber Eats, and Postmates were spending on paid search and promotions. They were losing tons of money. There was no way any of those companies ever made this money back from consumer LTV. I told them that wasn’t their goal. Their goal was to get enough consumers so the cross-side network effect kicked in. Those companies were paying their drivers no matter what. Might as well spend money to make sure they’re actually delivering something. And these companies would be willing to almost spend an infinite amount to get the cross-side network effect going because of its value to the company. 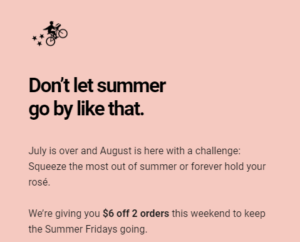 I’ve never seen a company as aggressive with promotions as Postmates besides perhaps Homejoy.

This does not only exist in marketplaces however. Superhuman, for example, does live calls or meetings with most people who sign up. This will never scale if they have millions of users, but until either their LTV increases to make this strategy profitable, or they improve self-serve onboarding, they are doing it, because no one would retain without it. You’re willing to do anything it takes in kindle strategies no matter how silly it might seem long term. This is what Paul Graham is talking about when he says “do things that don’t scale.” 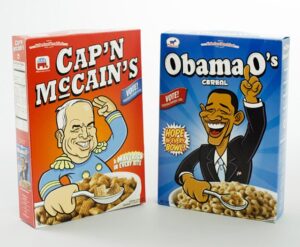 Airbnb sold politically themed cereal to raise money for the startup in the early days.

For kindle strategies, it’s more important they work quickly rather than sustainably or efficiently. A lot of early stage companies, for example, ask me about SEO. SEO, unless you have very clever hacks for content and authority, is a fire strategy. It takes too long to work. It might be a great fire strategy to sequence to, though. A lot of companies also ask me about local teams in each market they launch. This can be a great kindle strategy, but it’s generally a terrible fire strategy. Read more from me on this topic here.

Fire strategies by definition need to be sustainable. They need to be able to scale the company 100x and set up a long-term profitable business. So a question all entrepreneurs need to be asking when they pursue their kindle strategy is what fire strategy am I sequencing to. Pinterest used DIY meetups to sequence to influencer blog campaigns to sequence to virality to get enough content where it could scale via personalization on the retention side and SEO on the acquisition side. Most startups won’t go through that many sequences. I’ve seen many companies that have a successful kindle strategy, but it’s not sequencing them into any eventual fire strategy. For example, I spoke with an automotive startup that hacked SEO to get answer box results for their content to get initial users. That eventually caps on how many users it could drive, and it didn’t sequence them to something greater. They eventually shut down.

There aren’t that many fire strategies. Those that involve network effects are generally the best. Sales, paid acquisition, virality, and user generated content with a scalable distribution channel are the most common ways to create sustainable loops to either scale a network effect or scale a product that doesn’t have network effects. This is sobering when I tell entrepreneurs this. There just aren’t that many ways to scale, and almost all involve having extremely good retention as well. Otherwise, you won’t have the profit in the system to invest in sales or paid acquisition, or you won’t get enough users to invite or create content to attract more users.

There are many ways to sequence to a network effect or some other sustainable growth loops, but there are not that many ways to scalably grow without these loops. If you want to learn more about these strategies, it’s exactly what we cover in the Reforge Advanced Growth Strategy course.

Currently listening to Perception by Grant.