I spent five and a half years working at Grubhub, from series A to right before IPO. This allowed me to learn about many of the intricacies of the restaurant market and food delivery in general. More people have started to take notice of the market because of a slew of market entrants and Grubhub ($9.1B), Just Eat ($4.8B), and Delivery Hero ($7.2B) being successful on the public markets. With that, more articles in the press. Articles… that are wrong. I am reminded of the Murray Gell-Mann Amnesia Effect, invented by Michael Crichton, when I read these articles. It says:

Briefly stated, the Gell-Mann Amnesia effect is as follows. You open the newspaper to an article on some subject you know well. In Murray’s case, physics. In mine, show business. You read the article and see the journalist has absolutely no understanding of either the facts or the issues. Often, the article is so wrong it actually presents the story backward—reversing cause and effect. I call these the “wet streets cause rain” stories. Paper’s full of them.

In any case, you read with exasperation or amusement the multiple errors in a story, and then turn the page to national or international affairs, and read as if the rest of the newspaper was somehow more accurate about Palestine than the baloney you just read. You turn the page, and forget what you know.

As someone who does know, I want to explain some of these misconceptions, so people don’t think wet streets cause rain (even though rain does cause delivery orders).

Most successful marketplaces are built on top of an under-utilized fixed asset. For food delivery marketplaces, this under-utilized fixed asset is not the restaurant, but the kitchen. Restaurants have a fixed capacity they can seat at a restaurant. The kitchen, however, is usually capable of producing much more food on a daily basis than is needed by the patrons that dine in the restaurants. Restaurants are paying for that kitchen capacity regardless of how much they use because one of the highest costs for most restaurants in cities is the cost of rent. That’s why I thought it was so silly when all of these delivery service startups started making their own food. You’re spending a lot of money to build what the incumbent gets for free: excess kitchen capacity to make food. This is why restaurants love catering orders so much. They get big orders that can better leverage their kitchen capacity. After catering, their next favorite is delivery.

Why delivery? It allows them to serve many more customers at a time with their fixed asset, spreading their fixed costs across many more customers. Catering and delivery are pretty much pure margin for restaurants because their only extra cost is a delivery driver (or not, in many cases) who is subsidized by the people ordering the food via tips.

Misconception #2: Paying for Repeat Orders
The second major gripe I hear about food delivery marketplaces is that they charge the same amount for a customer’s first order to a restaurant and repeat orders. Now, a lot of this is drummed up by a competitor who does not drive demand, so it is biased, but I’ll endear it. The misconception here is that all a restaurant has to do is pay an advertising fee to induce trial, and if the food is good, the customer will order again based on that experience. That is now how food delivery works. Food delivery is very fragmented, and while there is differentiation by way of restaurant quality, there are usually quite a few worthy substitutes. Also, the way delivery orderers usually make decisions is method first, restaurant last. The way the average person decides to use Grubhub operates something like this (flowchart): 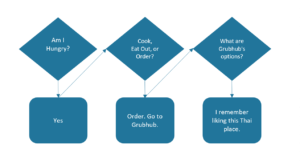 Restaurant loyalty is one of the least important and last steps in the process of the person ordering food. This means people ordering food do not have loyalty, and you need to compete for every order as if it’s the first. Google Adwords does not charge Apartments.com less if someone who clicked their ad a year ago when searching “apartments” does so again the following year. The reason they don’t is because if Apartments.com wasn’t showing up there, that user would have gladly clicked the ad for ApartmentGuide. Restaurants should absolutely be working to build loyalty, and some do. But expecting that acquisition was the hard work, and restaurants should only pay a SAAS-level fee for retention does not align to the value these marketplaces actually create for restaurants.

Changes That Do Make Sense
Now, there are some elements I would change in regard to repeat orders if I worked at these marketplaces. While Grubhub already charges a much cheaper rate if the order originates from a restaurant’s own website, there are other forms of orders that the restaurant seemingly drives itself without the marketplace’s marketing engine or aggregation. One is if the person ordering food directly types the restaurant’s name into the marketplace. Charging a lower rate for that makes sense as the restaurant is clearly driving the business. I know from the data that this is a small percentage of orders, but this would show good faith to restaurants that marketplaces want to align their revenue model to the value they create.

The other example of this is a little harder to parse. These marketplaces also bid on restaurant names on Google. If that drives an online order, what should be the charge? The restaurant drove the demand, but the marketplace spent the advertising dollars to close the order. In this case, I think these marketplaces should evolve to asking if restaurants want this type of marketing, and if so, charge for the advertising as a service. This was not possible for Grubhub when I worked there due to game theory issues with all the competitors, but with a shrinking field of credible players, it may be possible.