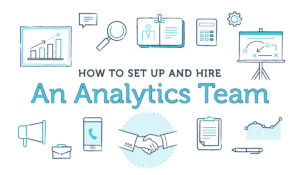 Analytics has become a critical role at tech companies. A common question I receive is how to hire analysts and where they fit into an organizational structure. Below I share some tribal knowledge around common team structures, options I think work best and hiring tips that leverage this talent.

Functional vs. Embedded Teams
One of the first questions organizations face when hiring analysts is how they should structure the team. There are two common choices organizations pursue: a functional and an embedded model. The functional model is an analytics team reporting to a Head of Analytics. In the embedded model, every department (sales, marketing, product, customer service et al.) is in charge of solving for its analytics needs, hiring analysts for their teams when needed, and determining to whom they report.

Benefits of the functional model are having a senior seat at the table in major discussions for the company. The advantages this presents is getting analytics its own budget for tools and infrastructure and solving other analyst specific needs that may not be a top priority on any other specific department. The downside of a functional team is how analysts’ time are allocated. In a functional team, an analysts’ time is usually allocated on a project by project level, meaning they usually enter a project once that project is already well defined (whereas analytics could have helped by define the project, had it been involved earlier). And the analyst has not developed any specific expertise for that area. In my experience, analysts get frustrated in this model because they can’t go deep into any one area, and the other departments get frustrated because analysts provide a more cursory benefit than expected.

The embedded model solves a lot of these pain points, but introduces its own. With an embedded model, analysts are hired into one specific team, and therefore can develop expertise for that team very quickly. Teams are happy because they always have a teammate ready to help who understands their problems. While analysts seem to be happier in this model, the downsides are the reverse of the functional model. When there are cross-departmental analytics needs, they usually fall by the wayside. Investment in infrastructure and tooling is usually massively under-invested in, and it’s unclear where budget comes from to solve these needs.

At Apartments.com and at Grubhub, we implemented the embedded model. Marketing took control of analytics infrastructure initially, but we had trouble applying it cross-functionally. The analysts across all teams started meeting regularly to share learnings, but also limitations. When we added the Seamless team into Grubhub, they were used to the functional model. Analyzing the two together created awareness for me of a new approach.

The Hybrid Model
At Grubhub, the value of a dedicated analytics team for infrastructure and tools became clear, but also the value of the embedded analyst. Once I started at Pinterest and dealt with the functional model, we began to work toward a hybrid approach. This is a dedicated analytics team with a Head of Analytics, but with the analysts dedicated to specific areas full-time. So the person reports to a Head of Analytics, but sits with the department they support (in my case, the growth team). As the growth team grew, we created a Growth Analytics Lead who reported to the Head of Analytics and managed other growth analysts dedicated to specific areas, like conversion optimization or on-boarding. This allowed Pinterest to have the analytics seat at the table for budgets and resourcing, but the expertise at the team level to make the most impact. It’s now what I recommend to all teams that are scaling.

Hiring Analysts
If you are scaling a company and need more analytics help, it can be hard to understand who to hire that will actually help your teams. Hiring from analysts at other companies, especially larger ones, proved not to be a great strategy for me. I found during the interview process that most analysts were actually what I call “reporters”, in that they ran well defined reports for people who needed them but didn’t actually analyze anything. If you read analyst job descriptions, they inadvertently screen for these types of people by saying the candidate needs experience with all of these special tools. I can’t tell you how many job requirements that list Omniture (or whatever it’s called this week), Google Analytics, SPSS, Tableau, etc.

Experience with tools is not actually what you care about (though SQL and Excel are a big help). The more tools someone has worked with, the less likely they are to analyze the output of those tools. What you actually want are people who are analytically curious. Our first successful analyst at Grubhub was a new graduate whose cover letter talked about how he tracked his sleep patterns and his diet to find ways to improve his health. He crushed dozens of analysts with multiple years’ experience in our interviews because he was using his brain to analyze results instead of just report. So I now screen for roles where analysis, not reporting, is the unit of value. Many analyst teams at other companies are structured that way, but the majority are not.

You also have to test analytical ability in these interviews. At Grubhub, I gave people a laptop with a bunch of data in Excel and some vague questions to answer from it. The question was based on a real question we gave an analyst intern, who returned it to me saying there was no trend in the data. I ran the analysis myself and found one of the most important correlations for our business (the impact of restaurants per search on the likelihood to order). So I said, you have to be better than our intern to get an offer. It turned out to be an incredible screener. Most people never got far with the data, or their answers were spectacularly wrong. The few good analysts cut right through to a direct way to solve the problem and could explain it easily.

I like this approach because it actually shows the analyst what the job is (and if they’ll like it), and I can walk the candidate through how I would solve the problem so if they did get it wrong, they could learn something from it.

—
Analytics team are one of the hardest teams to scale. One of the keys is building a model of a team that will scale with the needs of a company, and the hybrid model is the best model I have found to maximize the important levers of effectiveness (and happiness!). Structure is not all that is important though. Hiring the right candidate is critical, and the market is doing a poor job of preparing people for what emerging companies actually need in an analytics organization. If you can hire correctly and structure correctly though, you will have a competitive advantage over those who do not.